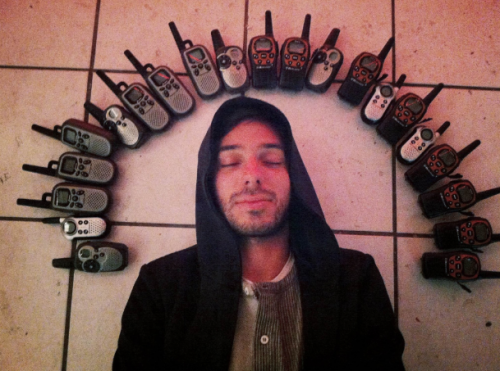 Walk That Sound is a participatory sound installation/performance aimed at spontaneous development of dialogues of sounds and words via network of amplified walkie talkies. It premiered at CTM festival in Berlin 2014, and its radio edit was broadcast on Deutschlandradikultur. The second staging was adapted to the city of Braga in Portugal, as a part of the residency at Semibreve festival, with the title “Braga, over & out” in October 2014.

Walkietalkies are for decades used in maritime, aircraft, security, childcare and event production surroundings. they also offer the cheapest communication for a group traveling together while abroad.
Usually in reach up to 12km (in dense cities, this distance is about 23km**) cheap walkie talkies (a pair costing like an entry level mobile phone) are capable of only two features : to either send or receive a sound at time. With repeating those actions, a fragmented conversation if formed: it has a two consecutive, but not parallel streams: talking (or transmitting any sort of sound) and, on the other side, listening that sound. Although it might sound like a downgraded phone call, but because of its plenty of frequency ranges, its free spectrum and almost unlimited number of devices and channels, it has a specific sonic quality and different user setup. With a possibility that many users are on the same channel (frequency), one sender can have as many listeners as there is devices (plus people gathered around each device). This way, a transmission is not "one on one" anymore it can go from one to dozen, or a couple to a couple of dozens, and so on. Meanwhile, interference from unknown, but nearby, walkie talkie users can appear. They are a sort of spam, but in form of a dialogue, overheard parallel narratives, whose parts we stumble upon on and is up to us if we will enter a conversation or change to a next/empty channel. These dialogues form parallel microlocal realities we can be sure that these stories are in a walking distance, but still, they can sound like from another world, coming suddenly on air, unrelated and almost unreal. The paradox of free and (un)secured, both inferior and superior communication of the walkie talkies: Except for the price of a pair of walkie talkies, the communication is free, inedependent of the operators and providers. It is probably the last supermarket available tool for unlimited
communication, though lacking in distance and high fidelity. There is no setup, and there is no privacy, although the chances that a communication is shared with an undesired participant is small he or she should have to be in less than 2km and on the same channel in order to eavesdrop. There is no option to archive except to record via audio output, and it’s possible that it’s actually the least monitored (and archived) kind of communication at the moment.